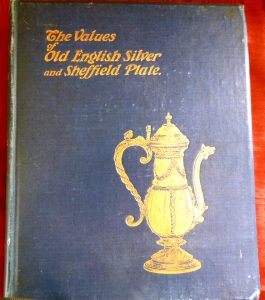 Introduction
Many fine antiques containing “silver” bear marks of some type. To the new collector, these markings may seem confusing; however, in my opinion, the British 700 year old system is the easiest to understand. It is the system that I, an American, will briefly describe here. Since I deal mostly in British silver, I will leave the discussion of marking requirements in other countries to a later time. For those wishing more in-depth study, I have listed below some of the excellent books on the subject of silver marks.

British “Solid” Silver marks
The official British marks assure the consumer that the standard, or quality, of the metal is right. Pure silver is too soft to make useful objects. An alloy must be added for strength. It is the ratio of the silver to the whole that the silver assayer must test. If the minimum requirement is met then the “Standard” mark is stamped into the object. The accompanying marks show where the object was tested for purity – the Town or “Hall” mark, who the “Sponsor” was and what the “Date” of the testing was. If the article was made during a period when taxes were levied on silver items then the monarch’s head may appear as the “Duty” paid mark. These five marks are loosely called “Hallmarks.”

Standard Mark
In general, since 1300AD, there have been two official minimum standards for the purity of silver. Except for a brief period at the turn of the 18thC, the standard has been .925 also known as 92.5% and 925/1000. This means that the silver content had to be at least 92.5 % of the whole with alloy of not more than 7.5%. From 1696-1720 a standard of 95.8% was imposed. This is known as the Britannia standard (not to be confused with Britannia metal which is really pewter). The 92.5% standard was restored after 1720 although the Britannia standard continued to be available to those few silversmiths who wished to use it. Standard marks are shown below.

Town or “hall” mark
As early travel was difficult, many provincial assay towns/halls/offices opened throughout Britain. Over the years most of these provincial offices have closed making silver stamped with provincial marks highly collectible. Today five offices/halls remain open for silver testing and marking. Their marks are shown below.

Date Mark
To this antiques collector, the date of assay can be the mark that requires the most effort to decipher. The variables include the 26 letters of the alphabet, the shape of the shield in which the letter appears, the style of the letter and finally the specific assay town. The letters of the alphabet cycle through the other elements changing shield and style at the end of each 26 or so years. To add to the interest, most of the assay office calendars years did not run January through December. Fortunately, the 1973 Hallmarking Act simplified the system by requiring each assay hall to use the same date letter cycle. Many of the books I list make searching for the assay date year of antique British silver easier than I describe here. If one knows the sponsor and the assay office, the date letter becomes much easier to locate.

Sponsor or Maker Mark
Silversmiths were required to register their marks. In many cases, silversmiths had accomplished, skillful, but not registered, silversmiths working for them in their workshops. Still, all work done in the designs and quality workmanship of the registered master silversmith and under his/her supervision was stamped with the registered Sponsor’s mark. The earliest Sponsor marks were mostly symbols but later initials were primarily used.

Duty Mark
Except for a period of 25 years in the mid 1700’s, the monarchs from 1720-1890 levied taxes on “solid” silver goods at the time of assay. In 1784, George III introduced a new “hallmark” – the monarch’s head —- to indicate that the proper taxes or duty had been paid. These are the profiles that were used:

Old Sheffield Plate (OSP)
This was the first type of plated silver to be readily produced. The process involved fusing a layer of silver on copper and forming by hand much the same goods as the Georgian sterling pieces. In fact, OSP might be more accurately described as Georgian plated silver. Silversmiths all over Britain, not just Sheffield, made this plated ware. As its metal content was not officially regulated, genuine OSP often does not bear any marks. If marked, the stamps could not resemble those on sterling silver pieces. Old Sheffield Plate goods can be dated by style and workmanship. Thomas Boulsover discovered the fusing process by accident in 1742-3. From then until about 1850, OSP continued to be a popular alternative to sterling. It remains an excellent choice for collectors of Georgian antiques. Well-preserved works by Matthew Boulton, the most famous of the Old Sheffield Plate sponsors, are highly sought after. Note: if a piece is marked “Sheffield,” it most probably is not genuine Old Sheffield Plate.

(EP, EPNS, EPBM, etc)
By the early 1840’s, Elkington & Co. of Birmingham had perfected and patented a less time-consuming, less expensive process of making plated silver goods known as electroplating. As one might guess from the name, the process involves using electrolysis to deposit silver on a base metal, usually nickel, Britannia metal (pewter) or a mixture of nickel, copper and zinc known as “nickel silver.” Often sponsors marks appear on this type of plated silver goods; however, most can be dated by style and workmanship. Generally, if one sees the letters “EP” on British pieces, one can assume it is electroplated silver.

“The Book of Old Silver” by Seymour B. Wyler

“An Illustrated Dictionary of Silverware” by Harold Newman

“A history of Old Sheffield plate” by Frederick Bradbury

“International Hallmarks on Silver” by Tardy

*These come in paperback editions.